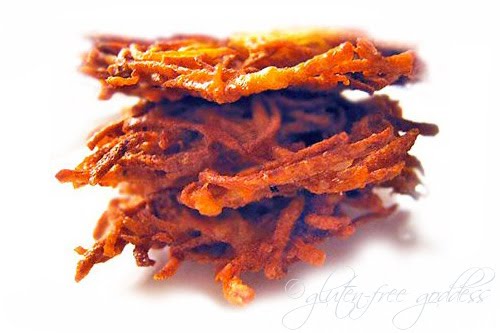 Have you made latkes lately?

I'm probably telling you something you already know. But just in case.

Latkes are fried potato pancakes made with fresh grated potatoes. Though latkes come in all shapes and sizes (via personal preference) I make my latkes thin and lacy, fried to a crispy golden brown.

Oy, Darling, these are good!

And for those of you who like applesauce with your crispy potato pancakes, there's my cinnamon laced applesauce recipe, too.


Yes, Babycakes, 'tis the season for latkes. Who doesn't adore them? And the good news is- they're super easy to make gluten-free. Serve them with homemade applesauce (recipe below).

Grate the potatoes by hand or in a food processor

In a large bowl, combine the grated potatoes with the onions and GF flour, then add the beaten eggs, sea salt, pepper. Stir well. Start with 2 eggs, and a half cup of GF flour; add more of each if you need to.

over high heat. Carefully drop the batter with a large spoon, or fork, into the hot oil, and press down with a spatula. I like my latkes lacy and irregular, and this is the method I use to achieve this.

Cook the latkes until they are golden on each side - crispy on the outside, and tender in the middle. This takes maybe five minutes, depending upon the size of the latke.

Remove the latkes with a slotted spatula and place on paper towels, to drain.

We keep the drained latkes warm in a hot oven, at 400 degrees F., until all the latkes are ready to serve, and try to work fast, Bubela, because the simple truth is, latkes are best eaten hot from the pan.

Serve the latkes immediately with homemade applesauce. Some people also like their latkes with a dab of sour cream stirred with a touch of horseradish. Spicy can be good!

Serves about 4 - depending upon appetites. 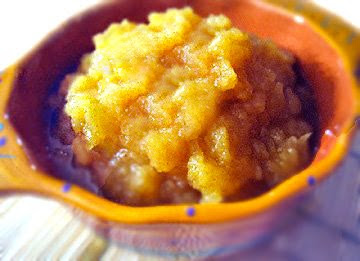 
Homemade applesauce is so easy, and so much better than jarred applesauce, let me tell you. It's a must with crispy golden latkes. I like to combine two or three apple varieties for flavor- Golden Delicious, Granny Smith and MacIntosh. Sometimes I add pears.

1/2 teaspoon cinnamon, or to taste

Place the chopped apples in a large saucepan and add the apple juice and enough water to barely cover the apples. Add a pinch of sea salt. Bring to a simmer over medium heat and cook the apples until they are fork-tender, about 15 to 20 minutes.

Mash the apples with a potato masher. Stir in the agave and cinnamon. Continue to cook over low heat until the apples are soft and all the excess liquid has cooked off; about 5 minutes. Remove from heat and cool.

Serve at room temperature; or cover and store in an air-tight container and chill.

Sweet and Tart.   No philosophy today. Dust off your cake pan, Babycakes. This is a moist and tender apple cake laced with a hint of cinnamon and studded with fresh tart berries. After seven   twelve   - er, 19!- years of baking various gluten-free incarnations of my tried and true family apple cake recipe, this could be our favorite. Maybe it's the sweet-tart combo. The subtlety of flavors. In a food culture obsessed with kicking up recipes with more for the sake of more (white chocolate peanut butter bacon swirled maple donut ice cream drizzled in dulche de leche coconut marshmallow syrup and dusted with sugared Meyer lemon zest and shaved cacao, anyone?) the clean and classic flavor contrast of apples and cranberries is somehow new again. Even, refreshing.  I don't need dessert to taste like candy. I like my cake to taste like cake.  You can bake this recipe with eggs and dairy, or vegan alternatives. See options below.
Jump to Recipe »

Blueberry cobbler- a taste of summer. Fresh blueberries = summer. And lucky for me these indigo-hued gems are not only gluten-free and chock full of antioxidants (every celiac goddess needs fistfuls of antioxidants, you know) but they're pretty much everything-free. So that shoots them right to the top of a certain allergy-prone goddess' Yum List. I've been plopping them into smoothies , scattering them in bowls of buckwheat flakes and simply munching on them straight from the colander. Ah. Blueberry heaven. Insert hazy slo-mo flashback Once upon a time- in the innocent and carefree days of living merely gluten-free- I used to make a delectable (and ultra-easy!) Summer Blueberry Crisp . And Sour Cream Blueberry Muffins to die for. Click on those recipes for some serious berry indulgence. Go ahead. I won't mind. I'll wait. I won't be jealous. Well. Maybe just a wee bit jealous, now that I am gluten and casein-free. Not to mention temporarily egg
Jump to Recipe »

YES PLEASE.  This award winning budget-friendly Santa Fe inspired vegetarian enchilada recipe is one of those happy accidents that springs from a burst of creative imagination. Or rumbling hunger. In that what-have-we-got-in-the-pantry sort of panic. I was craving the soft and spicy comfort of enchiladas one windy spring night back in 2003, and I had none of the usual suspects on hand (no chicken, or beef, no pinto beans).  But! I had one lovely mother of a sweet potato.  A can of organic black beans.  Some roasted green chiles.  One lonely lime.  And your intrepid Mamacita-Goddess at large thought, Hmmm. Why not? Deliciousness ensued. These wrapped little gems are soft and creamy and a little bit spicy- Just like a certain cook , my point-scoring husband wisecracks. It's the yams, I tell him. Er, sweet potato. I can never tell the difference. Can you? In the end, it doesn't matter.  What matters is how it tastes. And darling, these are so mucho scrumptiou
Jump to Recipe »

Luscious Lemon Cake So  I've been jonesing for a cake laced with citrus- not too sweet and not too light. A cake with character and heft.  Something akin to a lovely simple cake I remember liking as a child, a store bought bakery cake called Louisiana Ring made by Freihofer's. The cake featured a hint of orange. The day I decided to bake, I did not have oranges in the pantry- but I did have some lemons, organic Greek yogurt, and plenty of blanched almond flour.  And this simple home baked lemon cake was born.  In time for Spring. Love, Karina xo
Jump to Recipe »

Ah, flourless chocolate cake. The perfect rich dessert. Forgive the hyperbole. But I just can't help it. This is rich, sexy chocolate deliciousness on a plate. And such an easy recipe, especially if you use a food processor to do the work. Serve this to non-gluten-free folks with no apologies. None. Zip. Nada. And for gluten-free folks? Hand out seconds (we deserve it, don't we?). And the best part is- the recipe is inherently gluten-free and wheat-free. Always has been. No substitutions. No funny stuff. This is the same flourless chocolate cake I've been making for decades. It never contained flour. The only thing I've tweaked post-celiac diagnosis is adding more coffee and vanilla. Just because. And PS: See below why I make this recipe in a food processor- thanks to Bobby Flay. Karina xo
Jump to Recipe »

An Italian Classic - Updated. Today I offer you a simple recipe spun from the magic of leftover gluten-free spaghetti and eggs- a creamy, light frittata. Perfect for the weekend. Or when you're simply too tired to cook. Or you have nothing in the fridge but a carton of eggs, half a bag of kale salad and last night's leftover cooked spaghetti. It's one of those intuitive, spontaneous recipes I've pulled out of thin air, so many times. For dairy-free folks, the "cheese" pictured in this version was a vegan "mozzarella" (my current favorite is Vegan Gourmet). But if you prefer using dairy- select one or two of your favorite Italian organic cheeses. I've also made this yummy dish using goat cheese (and roasted red peppers!), and another time I tried a blend of fresh mozzarella and shaved Parmesan. It's a very versatile recipe. Celebrate Spring. Have fun with it! XOX Karina
Jump to Recipe »

A classic cookie made gluten-free. I suppose you could argue that one oatmeal cookie recipe is enough. I mean, how many oatmeal cookie recipes does a person need? To this I answer, at least two. Why? Well, first you have one with raisins (my oatmeal raisin cookies here ). Raisins give oatmeal cookies that old school chewy sneaky nutrition boost. They're old fashioned and comfy cozy. Kinda like spending one of those Saturday afternoons at your Aunt Martha's house, chillin'. Watching Mr. Rogers and laying on the floor with a pile of coloring books. Coloring outside the lines with a beat up box of Crayolas. Wishing the silver crayon was more than a lonely nub. And right at that nub lamenting moment she'd bring you a plate of cookies. Truth is, I never had an Aunt Martha. But I did have a chain smoking platinum blond babysitter who liked martinis a little too much. Or maybe it was gin and tonic. There was ice in the glass. If I was lucky enough to scro
Jump to Recipe »

Stay in the know. Sign up here for Gluten Free Goddess Recipes in your inbox.