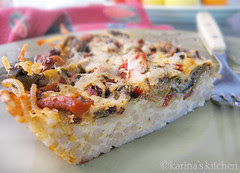 The Brunch, Quiche and Frittata Recipe Index has moved to two new pages.

Stormy weather comfort food.  Temps have plunged to zero here in New England. Oh, well. Perhaps I shouldn't exaggerate. Okay. It was 1 degree above zero. One. As in uno. As in eins. As in une. Translation? COLD. AKA soup weather. So I whipped up a wintry weather comfort food favorite. A creamy and delicious split pea soup. That just so happens to be gluten-free. Meat-free. Dairy-free. My secret? Coconut milk, darling. And a dash of spicy jalapeños. It was lip-smacking tasty. Trust me. You won't miss the ham hock. Stay safe and warm out there!  Karina xo
Read more

Banana bread for the rest of us. No apologies needed.  Out there in the cold cruel world, Darling, some folks apparently (still) view our gluten-free lifestyle through a jaded foodie lens, believing, first of all, that gluten-free anything is never going to taste anything but awful, and second, that this whole gluten-free trend (their word not mine) is a fad not worthy of serious consideration, appreciation and compassion. Apart from the standard (and brief) lip service that non-afflicted food writers, bloggers and journalists pay to celiac disease, adhering to the medical treatment that is a gluten-free diet is degraded- for that sexy topical hook- to a "bandwagon". An eating disorder. A diet by choice. They dub it a controversy. Two food bloggers referenced the gluten-free diet on a social networking site recently, bragging about their "iron stomachs" and their ability to chow down on everything, implying that those of us unable to ingest gluten merely have &
Read more

What's in our oven? Applesauce Cake. To the Rescue. Again. Because trying to wrestle gluten-free pie dough for an apple pie just seemed too fussy. Too complicated. Though in all honesty, that isn't the whole, unvarnished truth. The whole, unvarnished truth is, Yours Truly is more of a cake person than a pie person. It's true- pies have their charm. I've been known to inhale a slice or two of apple pie in my day. But here's the thing. And I'm going to be blunt. Gluten-free pastry crust is simply not as flaky and tender and melt-in-your-mouth wonderful as wheat pastry crust. There. I said it. Fighting words, to some. And if you are among those true believers feel free to disagree. And go eat your gluten-free pie. I bless you with a thousand sprinkles of pie fairy dust. With love. And kisses. And pink ponies. Respectfully. Gluten, you see, is more than a pesky protein with a bad rep. Gluten is what makes pastry dough soft, flaky and tender. Gluten is wha
Read more

A bowl of comfort with a kick. Created during one gnarly week in the Northeast, on the cusp of a March snowstorm. A soup recipe too good to ignore. Too tasty to keep to myself. So here it is- from The Gluten-Free Goddess Recipe Archives... The word wicked does not even begin to cover it. Epic... might be a start. Massive... might be an understatement. The snow, you see, is record breaking. One might even say, crazzzzzy. It's enough to make a big dog weep. In (previously) typical fashion, one might be tempted to throw up one's hands in defeat and shout, Let the carb cravings begin! But I might actually be in the mood to defy such cravings, yipping and gnawing inside my belly like so many tiny, quivering chihuahuas. Tugging my attention to mocha frosted vanilla cupcakes . I might actually choose, instead, to grab a big pot. And start a batch of hearty, soul mending soup. And living- as we did for three decades- on Cape Cod, you might guess I rustled up some classi
Read more

A New Year's bowl of comfort for 2022. Sweet 'n spicy chili with a dash of lime. New Year's Day is almost upon us. Rather than wax nostalgic about the bumpy ride of the year we've had, I'd rather post a simple home cooked recipe I know you'll love.  Making a pot of bean soup or legume heavy chili to welcome in a freshly minted year is a tradition as old as the hills. From Italian Pasta Fagioli to homestyle southern Hoppin' John , beans somehow acquired the favorable reputation of attracting good luck.  Why? I haven't a clue. But I do know this.  Beans paired with cubes of winter squash make for one sweet and tasty chili. That, Dear Reader, you can take to the bank. Wishing you all good luck, good health and lots of love in 2022. Karina xo
Read more

Fabulous Chicken Enchiladas- worthy of a game day get-together. Yummy. Easy. Chicken enchiladas. I never tire of them. And I'm not alone. My chicken enchilada recipes are among the most popular recipes on the blog. It's understandable. Enchiladas make a perfect make-ahead recipe for a weeknight supper, football Sunday, or a pot luck gathering. And they are (easily) gluten-free.  Make enchiladas earlier in the day- in this handsome ceramic baking pan , if you like. Half time nosh is done. Serve with this longtime family favorite-   Joey's Rockin' Guac   and tortilla chips. As easy as uno, dos, tres. Stay safe out there! Karina xo
Read more

Facing the Winter of 2022 takes a dash of courage. A pinch of patience (well, way more than a pinch!). And a hopeful refresh of your favorite treat go-tos. In other words. HERE WE GO AGAIN. Bring on the chocolate. So with that in mind, my beloveds. This is my latest version of a chocolate breakfast treat- a gluten-free muffin with options. If you need a sweet- but not too sweet- lure to start your day, these cocoa infused beauties might be just the ticket. If- like me- you may need a little extra deliciousness, especially on a gloomy day, you can add in (like I did, I confess) extras. Like, dark chocolate chips. And walnuts or pecans. It's up to you how much indulgence you need to get you through. We don't judge. The added bonus? Your kitchen will smell like a bakery. Like a chocolate hug. Like... love, maybe. Because the secret ingredient is always LOVE. Put love in your baking and your day is sure to be brighter. And more delicious. Love yourself. Take care of your Someone Sp
Read more

Stay in the know. Sign up here for Gluten Free Goddess Recipes in your inbox.